Hey - That's my Reputation You're Messing With

As a writer and a blogger, there are times when I take a slightly controversial stance, and yes, sometimes I end up getting "yelled" at and called a few things. I can take it and give it back when desired.

There are a few instances when it really gets under my skin however, and it's just happened again.

My book, "Rules, Britannia" was written for Americans travelling to the UK and has generally met with positive reviews. What's to dislike? It's helpful, funny, and I deliberately kept my own opinions out of of it because I wanted to deliver the facts, and nothing but the facts, about life in the UK. Each chapter was triple checked by resident Brits, and the entire manuscript inspected by one of my publisher's editors. I don't mind if people say it's not their cup of tea, or with people who never venture further than London, that they didn't find it particularly helpful. (I did say in the intro that it wasn't a tourist guide.)


What I do take exception to is people saying I'm wrong when they have no basis for their denouncement other than not having heard of the topic/custom/event themselves. Aren't many non-fiction books (like mine) written for informative purposes or am I missing something? If you think you already know all there is to know about the UK, don't read Rules, Britannia - but if you haven't been to the UK or read much about it, don't assume you know better than its English author and her editors. Any publisher worth its salt these days checks that the writer is credible and knowledgable.

Bristle number one happened a few years ago when an American academic implied that I must have made up Morris Dancers because he'd lived in London for five whole years and had never heard of them. Well, erm, no you probably wouldn't, living in London. (I secretly hope he was still there when the film came out.) Another person told me that he knew no one who called bread rolls "baps". Well, I didn't grow up using that term either but it doesn't mean it doesn't exist. They're to be found on Wikipedia fer cryin' out loud. 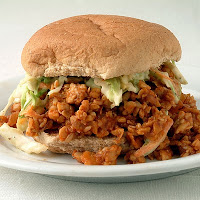 I'm currently bristling at a woman from Ohio who, on a US/UK forum took issue with the fact that I'd said Sloppy Joes in England were long, baggy sweaters as opposed to the sloppy, meaty sandwiches they are in the States - see photo. (Just Google the sweater, there are so many references, I am completely vindicated.)  I mean, if you're an American in the UK, you need to know that if you talk about a Sloppy Joe, half the room will be too young to know what you mean and the older half will have worn one in the 1960s and before.  Despite the fact that several forum posters said they had actually worn a Sloppy Joe, she decided to post a review on Amazon doubting my accuracy.
The woman entitled her review "A really fun read, but I know of at least 1 inaccuracy", then went on to say that she had been told both that a sweater is NEVER called a Sloppy Joe in England, but then two other people had told her it was. What?!?

Amazon reviewer,-  I'm thrilled you thought the book was a "fun read", but do you really know of an inaccuracy? You think I might be wrong but you choose to believe the people who merely don't know of the Sloppy Joe sweater/jumper instead of those who confirm my factoid.  (There was even a discussion of the sweater versus jumper, exposing the forum commenters as fairly ignorant of the whole international  "wardrobe" conversation.) As I said, I don't mind if you don't like my work but please don't question my credibility because of your own ignorance. That's neither a fair nor a thorough review.