Have Your Kids Cost You Any Friendships?

An interesting post over at Single Parent Dad the other day got me thinking. I don't really think my kids, or the kids of others have actually ended a friendship, but there have been a few that have come very close, or at least have tested my loyalty.

- the parent who, on entering my house, loudly instructs her children that I'm now the boss since it's my house. The instruction goes something like - "Children, remember when I explained that not all houses have the same rules as we do and we must respect others? Well, now you have to listen to what Mrs. Expat wants you to do or not do in her house." Loosely translated however, it means - "Kids, I'm going to kick back and have a glass of wine so if you don't play nicely, you'll have Mrs. Expat to deal with." And off she goes, leaving me to make dinner, referee fights and keep her glass full.

- the parent whose child can do no wrong. Fortunately most of my friends are on the same wavelength as me (is. we know our kids aren't angels and can generally resolve things if left to figure it out). However, every so often there' a parent (male or female) who seeks to iron out spats - but funnily enough, usually only when their child feels wronged. Their darling can have spent the whole afternoon screaming, snatching toys and refusing to put things back, but the minute said child suffers any indignity, we have to have a feckin' tribunal, with my child being the defendant (naturally) and a lecture on good behaviour from "well-meaning parent". ("Honey I'm only saying what your mother was probably going to say to you. Isn't that right mom?") One of these days I will have spine enough to say "Yes, but I wouldn't dream of disciplining someone else's child."

- the parent who wants their child in the spotlight. All the time. This one really makes my heart sink. You open the front door and there's little Jonny ready to show you his latest judo moves/drumming ability/mastery of Chinese. You spend the next half hour bearing witness to his brilliance, then intermittently thereafter. It's funny how the parent has usually wandered off into the TV room, leaving you trapped with the genius child. 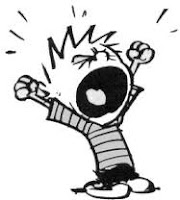 - the bullied parent. You know -the one who won't stand up to a very small human? The one who allows her child to yell and scream, dictating when it's time to leave, where and what they should eat, and whether or not they can talk to me. I have even had one child put his hand over the mouth of his mother every time she tried to say something. For some reason, this was totally acceptable to her (either that or she was too embarrassed to do anything), but I was so irritated, I had to leave the room. Again, in retrospect, I probably should have said "Sweetie (as you do when your teeth are gritted) Your mother and I are trying to have a conversation.....etc", but truthfully, there is no conversation to be had with parents like this.