How much stuff do you have lying around the house "just in case"? I admit to being absolutely terrible for hoarding potentially useless stuff that might never see the light of day, my rationale being "Ahhh, but you never know".

Need a pirate costume, disco diva, heavenly angel, hairy biker? No problem. I have so many scraps of material, feathers, glitter, buttons, etc. that I could dress the chorus of a West End play - at a moment's notice. I really need to go through the boxes and at least chuck out some of the duplicates. I should also try to give away some of the beautiful bolts of fabric in there. I used to sew quite a lot, but these days the sewing machine is brought out for halloween costumes and patching the knees of trousers that still fit the 8 year old.

My huge crime however, is not so much the "you never know when it's going to come in useful" stuff, but the stuff that's "too nice to use", and I'm not just talking about my wedding china.

A few years ago I bought a quantity of the most beautiful gift bags at Costco. I still have 80% of them because I keep holding back and making do with another, lesser gift bag. How rude of me! In effect, I'm taking one of the fab bags out, thinking of the gift recipient and deciding that they're not worthy of said gift bag.  I resolve to use all the bags up by the end of the year.

Ditto with all the gift creams and smelly stuff I have. How can they be "too nice to use"? There's only one use for them, and if you leave them lying around for too long, they tend to smell a bit "off" or the ingredients separate. They're not even good for re-gifting at that point.

And ditto the various spices and herbs in my pantry. Did you know that most of them have about a six month shelf life? Go on, take out one of those little jars from way in the back and do a blind smell test. If they're really old, you won't be able to smell the difference between the parsley and the paprika. So, not that I'm a fab cook (or even an enthusiastic one) but I'm going to use up the older stuff in every meal until my cache is under control. I have so many spice jars they cascade everywhere if I so much as look at them. 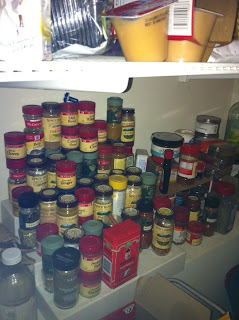 Challenge - take a look around your house and see if you're hoarding stuff. Make me feel better!
Posted by Expat mum at 17:33