Life's Too Short to Stuff a Mushroom

There's a great post over at Nanny Goats in Panties at the moment. (Yes, I know - great blog name eh?). Because she didn't take Home Ec, (or Domestic Science as it was called at my English school), there are a lot of kitchen gadgets that completely stump her. Her commenters have very helpfully explained what all four sides of a square cheese grater do; I found it very enlightening too BTW.

I didn't take cookery either (let's call it like it is), and I really regret it. Unfortunately at my school, it was quietly implied that really academic girls didn't take cookery. Art was OK, but only if you were seriously intending to go off on a Bohemian tangent - to Art school. (I think two girls out of 60 were that brave.) Heck, I was going to do a Music A level (AP to Americans) but because I had my eye on a Law Degree, I was advised to think again because Music wasn't academic enough. Has anyone ever studied music seriously? It's harder than Physics fer cryin' out loud.

Anyway, back to cookery. Apart from never being able to tell why my baking efforts fail (think hockey pucks), my lack of basic cookery nowse (sp?) also has me shrinking from certain recipes purely because of the terminology.

Roux - If this word comes up anywhere in the instructions, no matter how easy the rest is, or how many of the ingredients I'm familiar with, the recipe is a complete no-no. Not until they come up with a reliable de-lumper anyway.

Scald - usually means "burn and start again" in my kitchen, so it's a no.

Au jus - has connotations of "reducing" so I don't go there either.

Carmelize/deglaze - both have resulted in pans steeping for weeks in the sink, so erm, no.

DeVein - usually results in me worrying that the shrimp in question isn't properly cooked and we will all die a horrible death. Only cooked shrimp for me thank you.

Mandolin(e) - I prefer to keep all ten fingers intact for as long s possible, so another 'no'.

Shirley Conran is reputed to have said "Life's too short to stuff a mushroom". I obviously whole-heartedly agree and would add that it's also too short to be faffing around in the kitchen when you clearly don't know what you're doing! 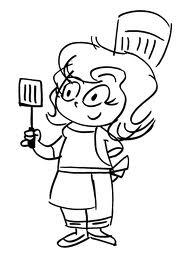