As I mentioned in a recent post, my book "Rules, Britannia" came out in 2006 and quite a bit has changed in the UK since then. Call it coincidence, but my mate and fellow ex-expat Iota is currently blogging about the changes she's noticing on her return to the UK. (She left in 2006 so we're looking at the same time frame.)

Another thing that's changed are kitchens - seating and dining to be precise. When we bought our first house in the USA we gutted it (as you often do here) and turned three teeny rooms into one huge kitchen. The kitchen not only housed an L-shaped cabinet and appliance corner with a six foot island in front, but a large kitchen table, six dining chairs, a sofa, an easy chair and a TV. Yes, that big - although not particularly big by American standards. American houses have long had live-in kitchens, often leading straight into the living and dining rooms with no walls or doors in sight. This floor plan shows a typical American (new) home. Note the distinct lack of hallway - you come in the front door (through the smaller covered porch) and land smack in the middle of the family room,

It took a few years but I started to notice the same arrangements springing up in British kitchens whenever a remodelling project was tackled. Where possible, adjoining walls have been bashed out to double the size of the kitchen (which in some cases still makes them fairly compact); out goes the table in the middle of the kitchen (or pushed against the wall) and in comes an island, complete with bar stools. What I've noticed is that there are usually only a few stools at the island; not enough to seat all family members, so any entire-family meals are still served (sensibly in my opinion) at a proper table, possibly in the dining room. (I know, I know, with kids doing different things during the week, family meals are not always possible and therefore bar stools at the island are useful. I can dream...) 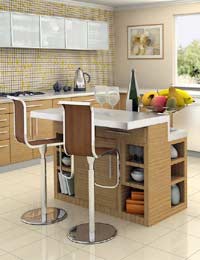 Here's an article that discusses the evolution of the British kitchen, from table to Breakfast Bar (remember them?) to islands. I'm rather fascinated I have to say.