To Crimp or not to Crimp?

That is the question.

I read today that at least one celeb has been spotted with crimped hair. (This is apparently Jenny Garth, btw....No, I know. Neither do I.) 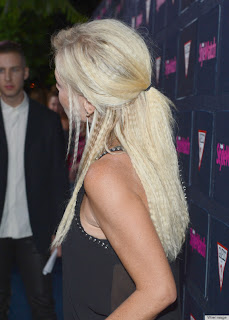 I have to confess to a fair bit of hair crimping in my time. It started when I was probably about 16 and involved hours of braiding ten strands of damp hair at a time, sleeping a la Medusa and waking up to examine the results. Some times it looked good (I use that word very loosely) and sometimes...., well, let's just say I washed it out immediately. My hair was long and there were lots of them so, depending on the thickness of the braids, it could get a bit out of hand.

Around the age of 19 I do believe I purchased my very own set of crimping tongs/irons. What used to take 24+ hours, could now be done in about one, AND you could crimp all the way to the ends instead of having to tie the hair off and having a spikey-straight bit at the bottom.

Given that I used to have bright yellow (natural) blonde hair, and wore a lot of straight black stuff, the look was striking, to say the least. Not one that you could wear every day. It was for special occasions, although obviously not weddings and christenings. I thought I looked good. Well, I'm assuming I thought I looked good given how much time I spent over it. (Sorry - I can't find a photo!)

It came as a surprise when a male friend at university pulled me aside and said if I was trying to alienate blokes, I was doing a bloody good job. Apparently it was a very aggressive look! Oh. well then. (He was a good friend and I believe he was trying to be helpful.) I don't think I stopped crimping for quite some time, and I also don't recall much activity on the boyfriend front. Funny, that!

So, obviously I'm far too old to be even thinking of crimping my hair and besides, the voltage on the crimpers would be too strong for the USA.