It's pretty hard, pretending that Trump isn't our next President despite gaining over 1.7 million votes less than Hillary Clinton and depite almost half the bloody country not even bothering to vote. The only thing that gives me hope that the entire country hasn't gone to the dark side is that less thatn a quarter of Americans actually support him.

Unfortunately, because of the character of the man, he's very hard to just ignore.  He reminds me of a really unbearable, attention-seeking child who'll do anything either to hide what he's done or just to suck all the air out of the room. He obviously responds to negative attention, but ignoring him just makes him jump on Twitter at 3am to pick another pathetic fight. Last weekend it was with the entire cast of the Hamilton musical in New York. His VP-to-be, Mike Pence, had gone to see it, and yes, he was booed by some members of the audience. (That's what you get when you say "Congress should oppose any effort to put gay and lesbian relationships on an equal legal status with heterosexual marriage", and then attend a Broadway musical. They are NOT your people Mike.) The cast member who was speaking for all of them, asked the crowd to stop boo-ing then read out a request to Pence which included the phrase "we truly hope that our show has inspired you to uphold our American values, and work on behalf of all of us."

Terrible isn't it? You can see the whole thing here.

Trump however - went ballistic. Mental. Lost it. And took to Twitter. Again. 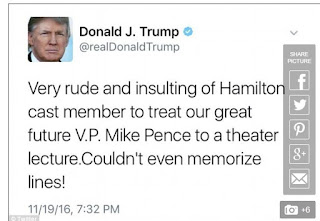 Then he does what he does best. Criticizes the "harrasser".

And then he demands an apology. 'Cause he's never insulted anyone.

Can you imagine four more years of this? Ye gads. Someone needs to ban him from Twitter for the good of the country. Wait till he starts spatting with Putin.