Readying to RePat - This is Not Gonna be Easy

I think I've gone the longest ever without posting on Expat Mum. And with good reason. I'm stressed to the hilt and rushed off my feet at the same time.

See, we have decided to move to the UK in July of this year. Yes. Like I said, with good reason. I will have lived in the USA for 27 years by the time I move back and trust me, this is not going "home". Things have changed so much that I look like well, a foreigner in my own country! It took me a few years to pluck up the courage to try to release a supermarket trolley (cart) with a pound coin. It's a bit embarrassing having to ask a fellow Brit where the coin goes and how you get it back - with an English accent. Most of the time I have to repeat myself as people just can't believe that I don't know the simplest of things. A few of them, I know, assume I'm a bit on the slow side.

Last week we were in the south of England trying to find somewhere to live and we popped into the nearest supermarket for a few staples. (Not the stationery kind, btw). Half way across the car park we realised we didn't have a pound coin, so back to the car where I knew I had one in my coat pocket. Nervously laughing and joking about how we'd never be able to liberate a trolley, we approached them, only to find that this particular supermarket obviously didn't experience much trolley theft and had abandoned the pound coin deposit system.

Once we'd done our tiny bit of shopping, and had directed the 13 year old to put back the multiple packets of biscuits he'd sneaked into the trolley, we paid with a card - that had a chip but no pin. It usually throws people into a tizz but I think they must have quite a few Yanks in that particular branch of Waitrose as the cashier gave the tiniest of eyerolls and then executed the payment procure remarkably smoothly. (I think the eyeroll was of the "When will these Americans get with the chip and pin programme?" variety.)

The next hurdle was the green plastic disc that was handed to me along with my receipt. No explanation, nothing. "What's that?" asked the Ball & Chain. "I don't know, just keep walking" I replied, hoping not to set any alarms off as we fled to the safety of the car park. (I then texted my cousin who explained that it was to nominate a charity. Votes (ie. discs) are tallied and the local charity with the most discs wins a donation.) 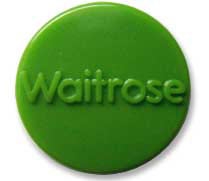 Oh yes, I have a feeling there's much blog fodder to be had in the coming months!
Posted by Expat mum at 13:55