I was reading a thread the other day on the Two Fat Expats Facebook page, (which I highly recommend). It started with this photo, then immediately launched a flurry of "passport panic" stories, as you'd expect. 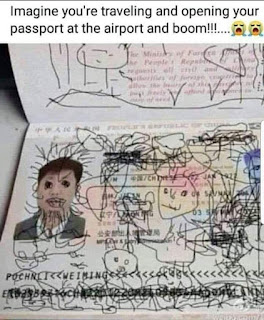 Can you just imagine?

I have to say though, (and I realise I might be jinxing things), that in almost 30 years of flying back and forth across the Pond, usually with children in tow, I only had one personal panic, but it still has the capacity to make my stomach flip.

About three years ago, I was flying from Chicago to London with my youngest, while middle and husband were following in a few days. Being Mrs. Ever-So-Organized, I put middle's passports into a plastic bag, clearly labelled, and pinned it to the ever-so-organised cork board in the kitchen. Got to the airport for our 6pm Friday overnight flight; pulled passports out at check-in desk - to see middle's face staring up at me.

Everything went blurry until brain kicked in. "Oh don't worry, I can just fly on my other passport", I assured myself. (Which might have caused problems, as they don't like you using your other passport in US airports.) Pulled UK passport out, middle child staring back up again. Yikes. What to do, what to do? And let me tell you, those check in people are sticklers for the correct documentation - Driving licenses? Global Entry cards? I tried everything. I was begging.

Long story short (me berating myself, making tentative booking onto 9pm flight, texting cousin who was picking me up at Heathrow, etc. etc), miraculously got hold of middle, instructed him to get "his" passport off the notice board, jump in my car and fly like the wind to the airport. How he made it to O'Hare in Friday rush hour traffic in the time he did will remain his little secret, but that was one stressful 40 minutes! Fortunately, we made it with THREE minutes left to check in and a few families nearby actually came up and congratulated me. I must have looked more ashen than usual!

And I'll NEVER do that again. These days, those passports are thoroughly inspected about 5 times before we cross the threshold and as many again en route to the airport.

There were some other hilarious tales on the Facebook thread though -

The women who, to prevent a meltdown, let her two year old hold her own passport in the immigration queue, only to find that when she took it from her to present it, there were no pages inside. Frantic search around the immediate area to locate all the pages, which immigration miraculously allowed through.

Or the woman who's toddler chewed through the cover. Come to think of it, my husband's passport has two dog teeth marks through the front cover - but it doesn't seem to mess things up, thank goodness.

But I know if my children were still small, I'd be following the recommendation of one mother - who keeps their passports under lock and key!